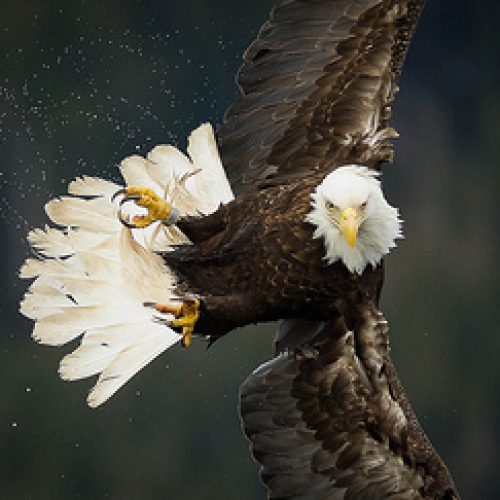 One of my most teachable moments occurred when I first heard the story of the naturalist and the eagle.

A naturalist was visiting a farm one day and was surprised to see a beautiful eagle in the farmer’s chicken coop. Befuddled, the naturalist asked, “Why in the world is that eagle living with chickens?”

“Well,” answered the farmer, “I found an abandoned eagle’s egg one day and laid it in the coop, and a chicken adopted it and raised the creature after it hatched. It doesn’t know any better; it thinks it’s a chicken.” The eagle was even pecking at grain and strutting awkwardly in circles.

“Doesn’t it ever try to fly out of there?” asked the naturalist, noticing that the bird never lifted its gaze.
“No,” said the farmer, “I doubt it even knows what it means to fly.”

The naturalist asked to take the eagle for a few days for experiments, and the farmer agreed. The scientist placed the eagle on a fence and pushed it off, bellowing, “Fly!” But the bird just fell to the ground and started pecking. He then climbed to the top of a hayloft and did the same thing, but the frightened bird just shrieked and fluttered ungraciously to the barnyard, where it resumed its strutting.

Finally, the naturalist took the docile bird away from the environment to which it had grown accustomed and drove to the highest butte in the county. After a lengthy and sweaty climb to the top with the bird tucked under his arm, he peered over the edge and then said gently, “You were born to soar. It is better that you die here today on the rocks below than live the rest of your life being a chicken. It’s not what you are.”

With its keen eyesight, the confused bird spotted another eagle soaring on the currents high above the bluff, and a yearning was
kindled within it. The naturalist threw the majestic beast up and over the edge, crying out, “Fly! Fly! Fly!”

The eagle began to tumble toward the rocks below, but then it opened its seven-foot wings and, with a mighty screech, instinctively began to flap them. Soon it was gliding gracefully, climbing in ever higher spirals on unseen thermals into the blue sky. Eventually, the mighty eagle disappeared into the glare of the morning sun. The bird had become what it was born to be.

The truth is that we are all eagles, yet if we allow our fears to dictate our reality and we live like chickens, we clearly will be chickens.

You may have accepted the chicken position in your own life, yet each of us is born to be an eagle; we are born to fly.

Excerpt from my latest book: When Did You Die?

Very simply stated fear is the absence of love.