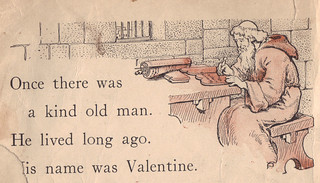 “The story of Valentine’s Day begins in the third century with an oppressive Roman emperor and a humble Christian Martyr. The emperor was Claudius II. The Christian was Valentinus.
Claudius had ordered all Romans to worship twelve gods, and had made it a crime punishable by death to associate with Christians. But Valentinus was dedicated to the ideals of Christ; not even the threat of death could keep him from practicing his beliefs. He was arrested and imprisoned.
During the last weeks of Valentinus’s life a remarkable thing happened. Seeing that he was a man of learning, the jailer asked whether his daughter, Julia, might be brought to Valentinus for lessons. She had been blind since birth. Julia was a pretty young girl with a quick mind. Valentinus read stories of Rome’s history to her. He described the world of nature to her. He taught her arithmetic and told her about God. She saw the world through his eyes, trusted his wisdom, and found comfort in his quiet strength.
“Valentinus, does God really hear our prayers?” Julia asked one day.
“Yes, my child, He hears each one.”
“Do you know what I pray for every morning and every night? I pray that I might see. I want so much to see everything you’ve told me about!”
“God does what is best for us if we will only believe in Him,” Valentinus said.
“Oh, Valentinus, I do believe! I do!” She knelt and grasped his hand.
They sat quietly together, each praying. Suddenly there was a brilliant light in the prison cell. Radiant, Julia screamed, “Valentinus, I can see! I can see!”
“Praise be to God!” Valentinus exclaimed, and he knelt in prayer.
On the eve of his death Valentinus wrote a last note to Julia, urging her to stay close to God. He signed it, “From your Valentine.” His sentence was carried out the next day, February 14, 270 A.D., near a gate that was later named Porta Valentini in his memory. He was buried at what is now the Church of Praxedes in Rome. It is said that Julia planted a pink-blossomed almond tree near his grave. Today, the almond tree remains a symbol of abiding love and friendship. On each February 14, Saint Valentine’s Day, messages of affection, love, and devotion are exchanged around the world.”
For more inspiration and information: http://templehayes.org/

← The Human Heart Craves Meaning.
Quote of The Week →

Nature is Our Greatest Teacher

AlanWatts,a British philosopher, stated that we are not born onto the Earth, we are born out of the Earth.Therefore, nature is not separate and apart from us, it is part of our connectedness with life.We cannot exist as physical beings without the harmony and respect of and for nature. Unity co-founders Charles and Myrtle Fillmore…

“The God within me meets and recognizes the God within you” is the basic meaning of the word namaste. Though we all seek different paths and adapt to our own unique beliefs, we are all made of the same energy and essence of God. Our life force as humans is the same. We have discovered…

Prayer generally implies having spiritual communion with God or an object of worship, through supplication, thanksgiving, adoration, or confession. Often the undertone of prayer is pleading, bargaining and making amends with God. In Unity and New Thought, prayer is an affirmative declaration of things, events and circumstances which we are accepting as truth. In other…

The Not So Secret Secret

Sometimes it seems we have too many people who truly need to help themselves before they can fully help others. Some people attempt to help others too soon on their own healing journeys. We all may know a few of these folks, who get a business card and a website and make great claims before…

Listen to Temple LIVE every Wednesday at 1pm CT on Unity.fm